Social equity in India means that a clerk earning Rs 6,000 each month in Mumbai must pay income tax but a strawberry farmer in Punjab’s Gurdaspur netting Rs 1.5 lakh every month should enjoy tax-free status.’ Twenty years ago, a journalist wrote this in anguish when that year’s budget raised the top rate of income tax just two years after it was cut to an all-time low of 30 per cent.

The journalist is now a BJP MP, but the irony in his statement has only worsened in two decades. Senior clerks still pay income tax and farmers, however rich, don’t. And the effective peak rate of income tax has shot up by 13 percentage points above the 30 per cent that P Chidambaram had cut it to in 1997.

Honesty isn’t the best policy:
How much tax you pay on income depends less on how much you earn and more on how much you can hide – or show income as non-taxable. The salary-earning class is the most disadvantaged because 100 per cent of income tax is taken away even before the salary reaches them. It is also not allowed certain tax-free expenses that non-salary earners are allowed.

The 2018-19 budget speech noted that an average salary earner pays three times more income tax (Rs 76,306) than a non-salaried taxpayer (Rs 25,753). If non-salary income earners pay even 70 per cent of what the salaried class pays government earnings would go up by Rs 50,000 crore a year. Finance ministers down the years have failed to correct this anomaly, surrendering to a system that penalises the honest.

The differential treatment of the two classes of taxpayers is not unique to India, but the large and widening gap in tax liability between the two is. With passing years, the system is getting more skewed. In the last 15 years, the number of people filing tax returns has grown four times faster than the number of taxpayers.

A large section of these ‘filers-but-not-payers’ is non-salary income earners. In fact, as a percentage of population, number of income taxpayers has been falling indicating, among other things, even heavier burden on the salaried class.

All tax, no service:
There are countries with income tax rates higher than India’s. But taxpayers in those countries have access to services that have either never existed or have ceased to exist in India. Public education – from school to college – and public healthcare have disappeared from the lives of the urban middle class. Private expenditure on education and health in India is one of the highest in the world – this is in a country where the richest 10 per cent of the population is poorer than the US’s poorest 10 per cent.

Income tax payers are forced to pay for clean water, breathable air, private security and – now increasingly – road use in the form of toll. The majority of salary earners are in the private sector, and the tax they pay doesn’t entitle them to pension, unemployment support or post-retirement healthcare. The income tax for this class of people is increasingly becoming a forced charity, alienating them from the state.

Countries with high income tax rates also have a much lower rate of indirect taxes than India. Prices of cars, smart TVs, smartphones, laptops are 20 per cent to 80 per cent lower in most countries with higher income tax rates. A back-of-the envelope calculation shows that the buyer of a mid-level car in India has to pay 58 per cent of his total expenses to government. If he meets with an accident, government is unlikely to bear the cost of his treatment or provide income support if he loses his job. 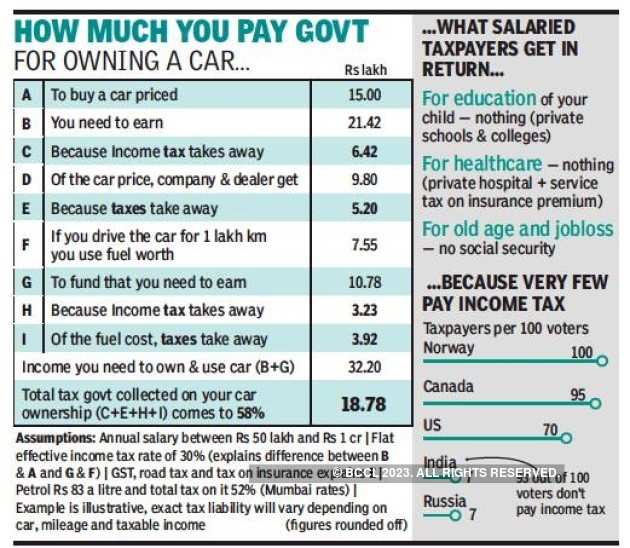 One milch cow, many holy cows:
The reason why income taxpayers, especially from the salaried class, are being milked again and again is because there are too many holy cows that government refuses to tax. Farmers, even the richest of them, enjoy tax free income. This leads to rampant leakages – an RTI query revealed that in 2012 over 8 lakh individuals declared agriculture income running into crores and paid zero tax on it. Several government panels have advocated taxing agriculture income, but clarity without courage is wasted wisdom.

Lawyers, doctors and coaching centres – among the most profitable and fast-growing professions – are exempt from service tax. Then there are MPs who enjoy privileges no taxpayer does – they decide their own salary, and tax on their income is not deducted at source. Much of their income is in the form of tax-free perks – 34 free flights a year with companion, free limitless first class train travel, free healthcare, rent-free house, Rs 20,000 monthly pension. None of this is to be grudged if MPs were to ensure that their paymasters – the taxpayers – are getting the basic services they are paying taxes for. But that is hardly the case.

One possible reason income taxpayers are uncared for is that they don’t matter as voters. Only 7 per cent of Indian voters pay income tax. In Norway, 100 per cent and in the US 70 per cent voters are income taxpayers. Last year’s, and Nirmala Sitharaman’s first, Economic Survey did some sweet talk. Stating that “perceptions of fairness suffer when the employee class is forced to contribute disproportionately to income taxes while the class of self-employed gets away paying minimal taxes,” it proposed a few remedial baby steps. They included providing special conveniences to income taxpayers, like faster lanes at immigration counters and quicker passport issuance.

If and when the finance minister begins to walk this talk she can do another small favour. She can request the tax authorities to stop emailing certificate of appreciation to taxpayers. Given the outright taxpayer abuse, these emails aren’t even worth the energy used in mailing them.